Still haven't got round to fixing my PC yet. Am dependent on internet cafes and computers provided by overseas hotels to retrieve my emails and update my blog.

I used to sit in front of my PC hours on end, doing nothing productive really. Checking emails, reading others' blogs, chatting. I have woken up at 8am, and forgoing lunch, stayed online till 4pm. Mind you, I have not even lifted a toothbrush yet at that point, but there I was gallivanting on the world wide web. I've managed to fill up my 80GB hard drive with quite a bit of music, movies and other naughty things that I had to get a DVD burner to archive some of them.

That's when the PSU went 'poof'.

After having to share the PC with others, I'm beginning to streamline my online usage. First in, check emails. This is a simple enough exercise as outta 10 that I get only 2 or 3 are worth reading, the rest being forwarded mails, old jokes, and online scams.

Next, see anyone comment on my blog or not (very hiao I know). I know, I know, the point of starting a blog is not so that you'd gain 'readership', but it would be nice to know that those who do read it leave a line or two.

After that, read what others have to say on their blogs. Granted again, you wonder if some of these bloggers would've been noticed if they never started blogging in the first place. I've heard of how a few choice bloggers almost spend their entire waking hours together, at the same watering hole. If one didn't know, you'd have called them "Geeks", now they're like e "Cool" bunch. I understand there's a group that refuses to have their photos taken in case, I dunno, we use them in a court of law??! Of course, they could be just a misunderstood bunch, and going up to say "Hi!" wouldn't hurt at all...

A friend has just settled into his new place, his castle in the sky (2nd floor actually), his domain, his retreat. Being someone from the contracting business, it was only natural that his new pad was done up in the best taste. I should describe it as a tropical retreat, yet there's no overkill with too many plants or wooden ornaments all over the place. I jokingly asked which was my room, in case I got bored with the one I own.

That being said, I always wanted to redo my flat, anyone's flat for that matter. I recalled grabbing my bro's floorplan for his new flat and starting to doodle out what furniture goes where and match them with colors. I used to hoard Home n Decor the magazine, wondering how to get hold of huge amounts of cash to, how they say it, "turn a house into a home". Too bad I don't have a design streak in my bones, else I won't have to contend with a badly renovated flat now. Still, I'm still optimistic something can be done to my flat, especially when my bro moves out at the end of the year.

"Remember yesterday,
walking hand in hand.
I wanna hear you say,
I remember you....."

Thanks to my sis, who kindly acceded to my song dedication Thursday night. Go spunky \m/ !!

It had to happen. I tried to upgrade my PC DIY style, and after 2 hours the PC power supply went "POOF" on me!!

I'm not fond of speaking in front of a crowd. 3-4 persons, I can handle. Put me in front of an audience of 10 or more, I can be a quivering mess.

Recently, after dragon boat training, Coach took the novel route of asking everyone what/how they felt about the training that day. I was one of the last few to speak. Whilst the ball was passed around, I was actually struggling for something intelligent/thoughtful/encouraging to say. Not that I didn't have anything to say, just that I was constructing it right there in my head. Usually I'd have pen and paper plus the luxury of time to come up with stuff to say. However, this caught me wholly by surprise and after a day of rowing, your mind doesn't function too well, on a linguistic level.

Finally my turn came. Deep breath. What came out afterwards was a botched up attempt at motivational speaking. My voice shudderd with emotion, my lines that I rehearsed in my head all jumbled up, and people around me were straining to make out what I wanted to put across. Should've taken the easy way out and said that our rowing sucked big time that day, but that's not very peppy now is it?

I remembered hosting a wedding dinner once for my nice couple friends. It was a relaxed atmosphere, set at a Punggol Fishermen village pub. I had been asked to be the MC for the night, with the caveat that I had to be bilingual.

Now, Diana Ser I am not, but I gamely took the task by the horns. I flipped through Chinese dictionaries, watched and learned from the hosts on mandarin TV programs, even typed out the script with Chinese software! The big day came, I got all liqoured up to calm my frazzled nerves. Blessed with a bad sound system and a microphone that sputtered along, I was coming across more like a nervous clown than an MC. The fact that I had to switch languages every paragraph just made it more harder. Luckily, my assignment ended after the couple signed their 'contract', and I was back at the tables drinking myself silly again.

Did I say that practice makes perfect? I've been solicited to be the MC for redcocoon's wedding in Dec. Good news; I have a partner in crime this time. Bad news; said partner in crime doesn't speak mandarin. No clown costume this time, the traditional Chinese dinner is being held at a fancy-schmancy hotel banquet hall. Time to bring out that Prada suit and dust off the 'ol zi dian again ... 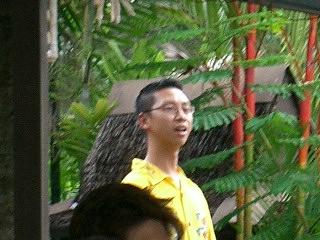 It happens to the best of us; not keeping in touch with people around you. It could be as innocuous as not showing up for THAT gathering. Suddenly, you're outta the circle, left out of the fellowship of that particular ring. You try your darndest best to get back in, apologizing effusively for the last no-show. Sometimes you do get back in, but things don't seem the same anymore; the warmth, the camaraderie just no longer seem to be extended to you. Then you wonder how you can make amends, hoping that the inner circle would welcome you back into the bosom of the clan. The shite has hit the proverbial fan...


I've been fiddling with my 3-mth old A520, familiarizing myself with all the settings that I can possibly configure to make that one good shot. It's been met with mixed results; some days I take nice ones, others I suck at it big time. I take comfort in knowing that most people started off like me too, through a series of trial and error. I try to take shots of the most mundane of things around; the old street people, an action figure, buildings, even the salt shaker at the restaurant table. Trying to go beyond the standard big grins, choreographed poses, and "eh, wait I not ready yet!". Candid shots are much more fun eh? Click on my Flickr(on the right) and post some comments can? Things are crazy around me right now. A tight roster whereby I'm flying off every other day doesn't bode well for the state of my flat. Everything is left hanging around unattended to, un-washed, un-dusted. I'd imagine the cleaners, if I were to hire any, would be tsk-ing all the way over the mismanagement of such a small flat. To think I'd be left to my own devices when my bro moves out in a month or so. Thankfully I have help from an angel from time to time. My Mum's also interested in moving back in with me, but I'm still iffy about that. Not exactly very bachelor pad when you wake up in your boxer and find your Mummy dearest going through your laundry. I'm sure there's a compromise, just have to find that piece of middle ground.

Next stops: Dubai, Osaka, London and also a short stopover in Hong Kong.

I just celebrate my birthday recently in KL. For most of us at our age, which is not too old, celebrating a birthday doesn't have to involve binge drinking, stripping, or embarrassing ourselves at a local pub by way of singing or dancing.

I remember when I was a teeny-bitty ahtiong. Birthdays used to mean that we'll have more sweets/cakes to have during recess from the rich man's son/daughter from our class. Many of us took pleasure in it as most couldn't afford more than the regular bowl of noodles and bandung during recess.

Secondary school was a different ball game. Where I went there were more rich men's' sons/daughters around. So we waited with bated breathe as the birthdays drew nearer; would there be some special dessert after recess for us? Would there be some special memento sitting at the table before the day ends? Or maybe we'll be invited to a BBQ after school?!! It was the secondary school version of Big Brother; you're either in, or out...

Going into adult life, birthdays are dreaded. For most it meant that a year has passed them by again without them achieving anything of great magnitude. It meant another 365 days has went by where their lives has not improved, financially or emotionally. Most choose to work through their Birthdays, hoping that no one would find out, and remind them how miserly small their lives are on this earth... ...

This year, however , I had a trip, literally. I took a bus up to KL with a companion, and had an enjoyable time going thru the malls and gorging on all that local food. Lemmme tell you for a fact that shopping for shoes is serious business for the ladies, you better stand outta the way when they get started or else....

I received nice SMS and emails, also a nice cake on my birthday, which goes to show that when you are nice to others, they're nice to you back. I also got the new Arsenal jersey, which I particularly like... No big parties,no binge drinking, kinda sedate in my books actually but hey, one has to start growing up yo?

Happy birthday to one and all...
7 comments: