This space will be left blank for a while.

There's not much material to work on, at the moment.

So there I was in Penang, body still weak from the viral infection that's taken a hold on me. I was left out when it came to sampling the many delicious local food (cuz they are too "heaty") , stayed sober while many others drank themselves silly (cuz I was on medication) , and lay in bed while the rest were having fun during the trip (cuz I needed rest, rest and more rest)

My friends have never seen me this subdued when I travel with them. The only reason that I had to move was for the dragon boat race. After rowing 4 times on the 1st day, each for 500 metres, I was consigned to bed the moment I got back to the hotel. Even my room mate moved out in case I passed the bug over to him.

This guy mentioned that I resemble a walking dead, until I got into the boat. Then I would be paddling my lungs out. We were duly rewarded with a Gold medal in the inter-airline event. It now hangs proudly in my room.

I came back with a terrible sunburn, and a deteriorating condition. The doc gave me more medication this time. I now have to take up to 5 pills, 3 times a day. I had hoped to change my flights away for a couple more days at home, but it doesn't seem possible at this point.

Going to an interview with a viral infection is no fun. I was sticking an inhaler up into my nostrils whilst waiting for my turn to be called. I had popped up to 8 pills the night before, which wasn't very restful. I was so hoping that I would not have a sneezing fit in front of the 3 interviewers.

So how did I do? Well, my nose held up, so that was a relief. It seem so short, but I was told that I was inside for 25 minutes. I managed to get by answering some situational questions with some success, bailed on one about in-flight sales, and also asked to explain why it was my 1st interview in 12 years. Towards the end I was asked what kind of leader I would most likely be, and I gave them the whole 9 yards... It was so coincidental that my friend from Bangkok posed the same question to me in a mock interview online just the other day!

All in all, I am glad that it is over. Now I can move on to stressing out, post interview, while they tabulate the results. 14 more days of stretching out my neck for the fateful email that'll determine what coloured tie I will be wearing for my 13th year with the company.

I am heading to Penang for the annual Penang International Dragon Boat Festival. I could have made it up there the same day of my interview, but I was so drugged out that I didn't make it to the airport at all. So I'm gonna head up there early morning, with my buffet of pills, and abstain from oily and spicy food.

Fantastic. That eliminates any gastronomic adventure that I should be having while in Penang. Yip-f##king-ee....
1 comment: 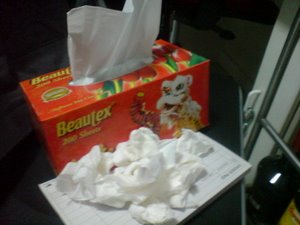 Great, the night before my interview, and I have a sneezing fit...Nah....choo
No comments:

Ladies and gentlemen, the good news; it's going on sale soon.

The bad news; it costs about US$499-US$599, is available only on an American mobile network (with 2 yr contract), and won't make it here till 2008 (that's if they actually work out which telco can offer the phone, if at all)

I have a feeling the hard working citizens in China is coming up with something that looks exactly like it, perhaps work even better?!!

Till then, start drooling...

So there I was helping out a friend, whose event company had organised a Makan Trail for a reputable overseas wealth management bank. Along with Shai and Kev, the 3 of us looked quite decent in our aprons I must say.

I was paired up with Kevin to man the Ah Hung Durian stall at Geylang. It was a very hot day out and we were impress with how the hard-working fellas do 16 hour shifts day in day out. I was complaining about the heat 20mins into my short stint, an I was not even involved in lifting any baskets of durians!!

So the teams started streaming in shortly after lunch. Most were enthusiatic about the task at hand, which was nothing more than removing the delicious "yellow gold" from the thorny fruit and packing it into styrofoam boxes. Really, it wasn't difficult to give them full marks for their efforts.

Teams consisted of an employees of the bank, along with their friend/family/maid... Most were quite upbeat, despite the heat. Many had already eaten their fill at other stations; oysters, pizzas, Indian rojak, chicken rice. Still they gobbled task in a short 5 mins, from opening the durian to spitting out the seeds of the fruits! Another team consisted of 6 kids ranging from 1-6 year old, being herded around by 3 adults. Whilst they probably didn't know what to expect from the pungent fruit, the adults still fed them small morsels. Of course, being a foreign bank, here were expats aplenty in some teams. Most gamingly tried the fruit, egged on by their local colleagues.

I was quite impressed with the way the Makan Trail was organised by my friend's young upstart events company. Even the special guest, Makansutra fame KF Seeto, was glad that the event brought people to all the best foods in town. The particpants also enjoyed themselves I suspect.

However, there were a few teams who had too much of a Singaporean competitive streak in them. Granted, it was a race of sorts, but ultimately the objective was to have some fun with friends and family. At my station, there was a team that complained that the improperly opened fruit was slowing them down, and made little effort in eating the fruit as soon as they put it into their mouths, spitting out half eaten ones just to shave off a few seconds. Another decided to not even touch the fruit when she saw that they were not of the highest quality, and sped off...

At the end of the Trail, participants were treated to a nice lunch at a local restaurant/pub. Food and drinks flowed, but many also made a hasty exit once the prizes were given out, some midway through a speech. Tsk tsk tsk...

It's an activity with so much finances/manpower pumped in by a generous company. The least one could do is to let loose and enjoy it. Otherwise, why even turn up eh??
2 comments: 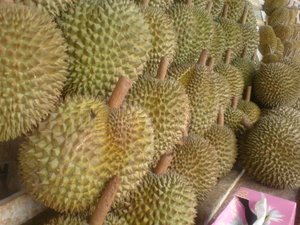 So what do i do after a 12hr flt? Go help out friend at durian stall...
No comments: