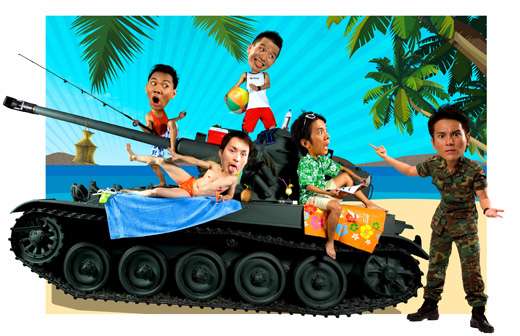 It has been a while since I watched any theatre/play/musical. So I was hyped up about watching "Own Time Own Target", a play centering around National Service.
I didn't understand though, how it had to be 2 hours or more for something that has National Service as a backdrop. It's been done before and seriously, there are only those few jokes you can tell about NS before it gets old.
The play made up of 2 halves, each with its own storyline (hence, Own Time Own Target?).
Part 1 was ok, with the actors taking a stab at a recent security lapse that happened locally. It did illicit some snide guffaws from me, but that was it.
Part 2 began promisingly, with the familiar backdrop of the 1st fourteen days in BMT. I could identify with the charactors portrayed, especially the Seargent (NOT the one whose only line was "CHEEEEEEBYE") who reminded me of my own whilst on Tekong.
Smiling Tiger we used to call him...
Part 2 was excruciatingly long, and too pink even for a neutral like me. By the umpteenth ditty the performers put on I was looking at my watch, wondering when all the farce was gonna end.
And how I bolted outta that exit door.
P.S. The night did end nicely, with us cheonging all the way down to Wala Wala for the last set. Now THAT is a show!!
No comments: 
It been a while since I met the motley crew for a nice meal.

It was through a casual conversation on plurk, coupled with the fact that I could not get a decent meal without burning a hole in my pocket whilst in Zurich, that I suddenly had a craving for curry fish head.

More plurking here and there, and after some googling, we settled for Ocean Curry Fish Head at Toa Payoh Lorong 8. I actually saved my tummy the whole day for this!

The thing to note about the group, some of us are fashionably late.

6pm became 7pm, meaning we settled down by 8pm. Those that got there early had ordered ahead-thankew JF and Aloe, so by the time we plonked ourselves down the table started filling up with plate after plate of delectable dishes.

Won't go into a detailed review but suffice to say all were well satisfied. The mouth didn't stop moving; we were either wolfing down the food or engaging in light-hearted banter. Not bad for $10/head.

We walked off the heavy meal...to another food area. Durians were bought this time to go with more refreshments. An eager drink stall lady had to come back to us twice for orders. Some of us had the bright idea to wash the durians down with beer. Mistake.

The gang dispersed slowly from 10pm onwards. All that food made me dizzy, and I dozed off on bed promptly.

5th July 2009 will have a significant place in my heart.

This was the day that 10 Arsenal fans went to Novena, Velocity to have their heads shaved in support of Childrens Cancer Foundation, on their annual Hair for Hope event.

If you would like to support this worthy cause too, consider pledging your donations to any of these guys below. Words of encouragement are welcome too!
Arsenal Singapore Botaks!!