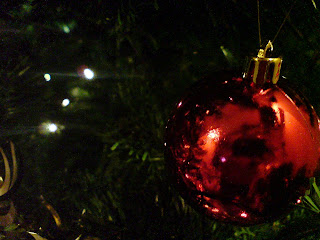 So it be Christmas soon.


I just came back from my buddy's place and was roped in to dress up the family's Christmas Tree.

After some half an hour, we put together a decent enough looking tree to rival those $3000-odd ones at the shopping mall.
Not being Christian, I never fully grasped the real meaning of Christmas. The biblical origin is easy enough to look up. It's the way it is celebrated that I am having trouble consolidating.

Is it another expensive excuse to party the night away? In some neighbourhoods, it has become a showcase of one-upmanship amongst residents. Maybe it has to do with the shopping. Or the hope of receiving a nice gift.

The season of giving, they call it.

I used to work at a retail store. I once had some office gals asking me to gift wrap toothpaste for the office party, in which all had to play secret santa and buy a gift for another colleague. Toothpaste, all 4 tubes of it, bundled in a themed gift wrapping paper. If she was gonna give a gag gift, she could've done better with some packs of condoms.

So it is that I have been scheduled to fly off to Hong Kong on Christmas eve. Hence a few gatherings with different group of friends have been planned at my humble abode. No fancy tree, no "Secret Santa", no Christmas ham, no carols.

Just a shite-load of alcohol, some local finger food, and the Wii...

Just a simple get-together can be awesome. And yours was one of the parties I attended that I enjoyed tremendously! Even without the alcohol.