#1 way to spend your bonus quickly:
Go on shopping spree.

I like to think that I am in control of my finances most of the time. However when I got me bonus, I went outta control. After keeping aside some savings and a red packet for Mummy dearest, I took to the malls! 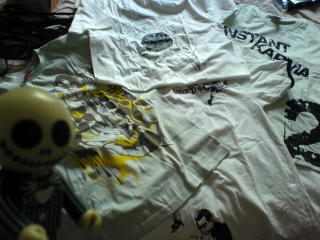 Yes, I already have alotta T-shirts in my wardrobe. However I couldn't resist buying some from local designers; Refugees, Instant Karma (they gave me a 10%disc on the basis of me being Shirlyn's bro, very nice), Collage Workshop, Hooked Clothing, all had nice T-shirts that can rival imported ones anytime. I bought light/white coloured ones as I realised I have many black ones. 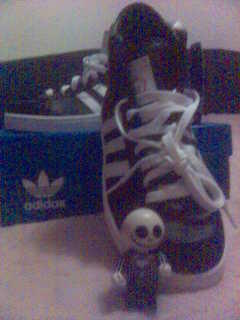 I saw this pair in Japan while working and took to it almost immediately. Checked it out in Queensway and it was going at a very good price. Tried it one, and it felt just right. Plus it's black, I don't have black sneakers. It's called the Adidas Jabbar Hi.For those younger ones, it's named after Kareem Abdul Jabbar, a great basketball player for the LA Lakers in his time. He also acted in a few movies, think it's Airplane and Game of Death along with Bruce Lee! Now, wouldn't YOU buy a sneaker endorsed by such a great guy? 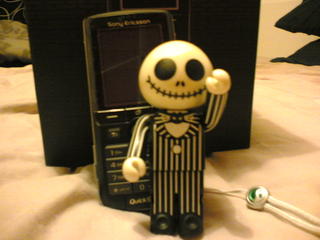 Next up was my proudest purchase; the New K750i

This mobile phone is da bomb I tell you. I was fiddling with it till late night, going through it's many new features. Dammit this phone can take multi-burst shots! You can see the diff in resolutions from the above 2 photos. My Sis also went to get one too, and my friend redcocoon was swooning over it. Many pics will be coming your way...

Next is the A520 my Sis bought for me. I'm still tinkering with it, and should be joining Canon's digital photography workshop to learn how to take better photos. No sense in just snapping away like a tourist right? Will upload new photos onto Flickr so all can view them. 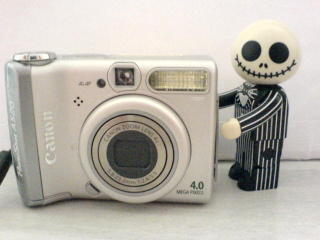 I also made a trip to Ikea. I tell you that place just is not a place to go when your will is not strong! I was looking for a coffee table, yet spent another $150 on other misc items like shower curtains, ice trays, coat hanger, duvet cover. I like to buy stuff from there, my place is almost like it's plucked out from the Ikea catalogue! 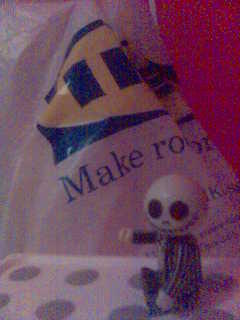 To wind down, I headed down to Wala Wala. I haven't been there since I started Dragon Boat training so I went back 3 nights within the week! I came away very impressed, and got an education about classic metal rock. I'm sure Shirlyn will be more than willing to share with me the files she has on Led Zeppellin, Rush, Black Sabbath, ACDC and some that I may not know of....