Used to be, we didn't know where we were flying to until the next week. Now I know where exactly I'll be come X'mas, New Year, everyday before that and everyday in between. Takes a bit of the mystery away, but I'm sure it's very helpful to people with family and, to a certain extent, couples.

I thought my Nov roster was tight, December is jammed packed! Granted I have about a week off to get ready for my good friend Redcocoon's wedding dinner, but after that it's all work, work, work!

Have you noticed that they are starting to put up X'mas trees in front of the larger shopping malls at Orchard? I do get to have X'mas off this year, though where or how I'm gonna celebrate it is still very iffy at this point. Have yet to decide if I'm gonna buy any presents for anyone this year. It's all gone very commercial since 5-7 yrs back, and I think it's just a chance for people to spend their hard earned bonuses(if any), and be in a popularity contest by way of how nice, big or expensive their presents are. Yes, it's consumerism at it's prime, this time of year.

I hope after the Nov race I have some time to consolidate my energy and channel it to some specific areas. Right now I'm a bit scattered here and there, so hopefully as the year draws to an end I can be in a better position to face 2006.

So, have you been naughty or nice??
2 comments:

Getting to Know You

We do it all the time, everywhere we go. We make up our minds about people we don't know, without bothering to find out more. I'm not talking about making friends or asking them to be your best buddy or anything like that. No, I'm just saying that we should actually have a conversation with the said person before deciding whether they are worth the effort or not.

I came across this guy who happens to train with me for dragon boat racing. Now, truth be told, I resented him joining us in the 1st place already. Plus he seems to have something to say about the training ALL THE TIME. Therefore I was not that over the moon when I found out he was operating the same London flight with me the Sat evening just past.

I didn't come into contact with him during the flight, except for when he came down to say hi during the lull period. We exchanged pleasantries, and I said I'll text him if my team decides to have a Chinese lunch at Bayswater. I really didn't think too much of it afterwards, as I was prepared to crash out while in chilly, wet London.

He bumped into me however, on Sunday. I decided to try out this Nooch-concept restaurant across from the regular crew joint. He haven't had his lunch so we went in and sat at a table for 2.

More pleasantries were exchanged, we chatted about the one common topic that we had; dragon boat racing. As the lunch drawn on, our conversation stretched into work, relationships, and all that jazz...

I was surprised that I was exchanging so much information with this guy that I barely knew, and in the beginning, actually resented. We went to an English pub later to watch Everton hold Chelsea to a 1-1 draw(finally!), along with a couple pints of Guiness. We only parted ways when both of us got tired from the jetlag and decided to head back to our respective hotels. I came away however, gaining an insight into how the crew in his department viewed those in mine, and how we are both so blinded by all the bureaucracy from the management. In a perfect workplace, there'll be so much more communication between the 2 departments that it'll be so much more fun to fly.

Yes. And I'll live in a fancy apartment, fly as a hobby and have a svelte female chauffeur drive me around in a Bentley.

So, can't we all just...get along?
No comments:

"You used to be so kind, so sweet. Now you're just this cynical bastard who has a warped view on most things that happen around you. I want the old ahtiong back..."

No one can argue that as one grows up, things change. Seriously, I dunno when it was that I became so blase about many things. Nothing excites me too much now. I've settled into a cruise mode, letting the world rush me by, not caring, not participating. 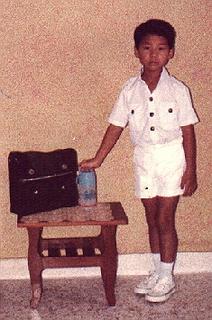 So, have you seen this guy?
2 comments:

There we were at Cathay Cineleisure Orchard, which according to my Sis, has the best seats n sound system in town. It was a choice between the soccer movie Goal or the comedy The 40 yr old Virgin. We decided to flip a coin for it. Heads. The comedy it is then.

I saw this movie poster at the theatres in San Francisco last month when I was there, but I was too jetlagged to catch it. It stars the same guy who plays the news anchor in Bruce Almighty. You see these bit part characters all over every movie you see, and never realise how much potential they have sometimes.

So we bought tickets and surprisingly for a 9pm show on a weekday it was pretty full house. We got to our seats and settled in. Not that many commercials or previews before the movie started, which is nice.

Steve Carell plays a guy who works in an electronic store. Over a poker game his male colleagues find out he's a virgin still at 40( hence the straighforward title). The rest of the movie is really his journey towards a quest to be de-flowered. I won't spoil it for some of you, but I have this word of warning; don't be munching on your popcorn or sipping on your soda while you watch the movie. You'd just as soon spurt everything out laughing your ass off! I was laughing so hard and loud it hurt!

I haven't seen a movie for a while now, and this one is a good one to kick start it. And yes, Cathay Cineliesure is the best cinema in town.
3 comments:

The other day, on a whim, I went for a 40min shoulder & back massage. Now, before this, my idea of a good massage almost always involved various forms of "special services". What can I say, I was young and hormones were poring out of my every pore.

This time it was different. The action takes place in a spacious open hall. The contraption that I was supposed to mount looks like a cross between an incline bench and a kinky sex toy. 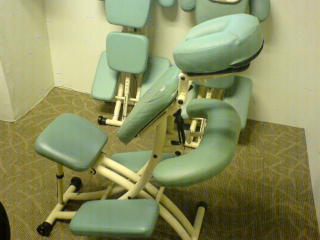 "Ya please, do softly. Thank you, Uncle."

He started from my neck, then moved on to my shoulders. Not bad, I could get used to this. I found out later that he was just warming up.

He proceeded to jab his elbow into my back next, throwing in his body weight for good measure. This is supposed to be healthy?! He continues to prod and poke his way from my shoulders down to my lower back. I'm trying to breathe properly with his every stab into my boney self.

"I very soft liao. Your back not healthy, that's why you feel pain."

"Wa you so pain meh? You wriggling all over leh!"

It became the longest and most excruciating 40 min of that day. I've never been touched like that by an old man before too. Gosh, people actually sign up for up to 30 sessions for this kind of "therapy"?

Yes, yes, yes!! My PC is back! Apparently the motherboard was short-circuited and that took some time to fix.

I've been away for more than a week. So much to write, yet I have so many things that I've not taken care of. Will make a trip back to blog-land soon... ...
3 comments:

That's it. I'm throwing in the towel, raised the white flag, given up.There's only so much DIY I can do. After switching over to a new power supply, the damn thing still wouldn't hum! So it's a trip to the repair shop for some semi-professional help.Hopefully by the time I get it back next week Repair Man has a black beauty waiting for me. For my dear readers (all 4 of you) , you'd have o put up with the slow update to my blog.

I tried my hand at cookin dinner the other day. It was to be a 4 course dinner. Now I'm no Jamie Oliver around the kitchen, in fact my kitchen exists for purely asthetic reasons, save for the occasional boiling of water and instant noodles. So along the way I had a lot of help from my dear Sis, who's quite the chef from what I hear from her friends... After a trip to the supermarket, I came up with the following;

I'm glad to report that dinner went quite well, my dinner date didn't keel over from my culinary expedition. I wouldn't be embarking on another journey though, and will have to depend on the neighbourhood S-11 for my grub for some time to come...

The Singapore Regatta is just around the corner. Training will be stepped up and the feeling is we should be able to do better than the last season, with more teams entered and qualifying for the finals. So if you're not doing anything 26/27 Nov, head down to Boat Quay for some fun and games. If you like, hang around for the post competition party on the 27th, the guys seem to have that in the bag already...

Will be making another road trip when I get back from work next week. It's Malacca this time. I hear there's not much to see save for some historical sights, but there's lots to eat so it'll be a hoot. Wonder if any kind soul can provide me with more info other than those that I can find on the internet, maybe play local guide for a day??