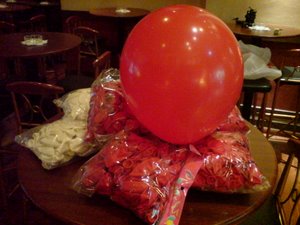 Getting ready for Arsenal Singapore launch
No comments: 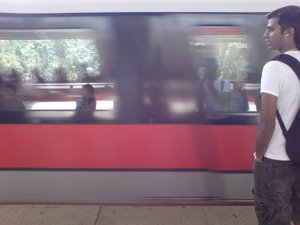 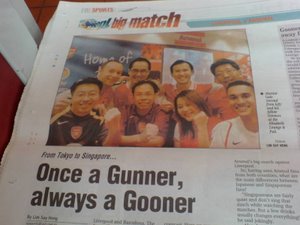 I attended 2 meetings back to back the weekend past. Both entailed the inner workings of the clubs I'm currently involved in.

The 1st one took place at an informal setting in McDonald's. Although I only had one issue to address during the meeting, it quickly became a hotly contested item between 2 of the members. It almost got hot enough for one of them to slowly start to raise his voice, and the other making token gestures to appease him. I stepped in to voice out my perspective in as calm a manner as possible, and after a few more helping words from the rest of the floor, things cooled down.

All this 20min of to-ing and fro-ing over what? The club logo design, the colour it should have, and where it should go. Geez. I thought the group (mine) assigned with that duty was given total control over it!

Perhaps, as most of us lack corporate experience, we are not able to move on when it comes to getting a consensus. Is that why meetings in the real world get dragged on for the whole day?

The 2nd meeting was the polar opposite. The agenda was clearly written, with duties assigned accordingly and with no fuss. We breezed through 3 pages, with a Tiger in hand! And this is the more important meeting of the 2, as we will be dealing with the media and general public quite a bit.

Kudos to the Excolads of Arsenal Singapore for all the background work. I guess as most are working in a corporate environment they know how to push through and accomplish more within a shorter amount of time.

The former was lead by a manager, the latter managed by a leader.

Well I'm off to Tokyo/LA tomorrow morning. From what I hear the new hotel in LA is very near to Disneyland. Hopefully I can see the fireworks from my window, saves me US$50-odd entrance I think.

When I get back I have been tasked to help out at the launch of Arsenal Singapore on the 31stMar. This will be the same night that Arsenal take on Liverpool. There's gonna be free finger food and as much beer as the sponsors can afford, so come on down to soak in the atmosphere.

I will be bringing along one of my most precious Arsenal memento, my 30 quid ticket for the Arsenal v Spuds match played at Highbury on 22ndApril, 2006. Although the ticket costed me much, much more than it's face value, I thought it was money well spent. 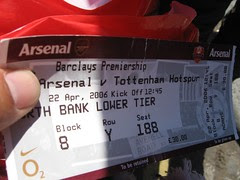 So, along with a few other hard core Gooners, I will be welcoming new members to Arsenal Singapore come the end of March.

Have you been Arse'd to join in yet??
1 comment:

Success. It does not come easy for most of us. When it does we just wanna bask in the spotlight for just a li'l while longer.

Me? I don't win many battles in my life. I do, however, enjoy other peoples' success and am always beaming with pride for them.

My Sis, that lovely rock chick who fronts The UnXpected, is one such person. I'm most times blabbering about her to my friends, colleagues, family, to a point that I think I may have done more bad than good for her reputation. Living apart on opposite ends of this tiny island, we stay in touch through slews of smses, and chat online. When the pocket allows, a quick hop to Wala to catch her in her element, amongst appreciative audiences.

Therefore it is with great pride that I would like to ask you, my peng yous, to go get her album that's going to be released on April 7th.

There's gonna be a launch at the Esplanade Outdoor Theatre, so join me and perhaps get an autographed copy of her new album, titled "Newfound Jealousy".

The itch. The urge. The impulse.

I've worked hard enough. I should reward myself. Why not?

I wanna be mobile. I wanna do more with my idle time. I wanna play. 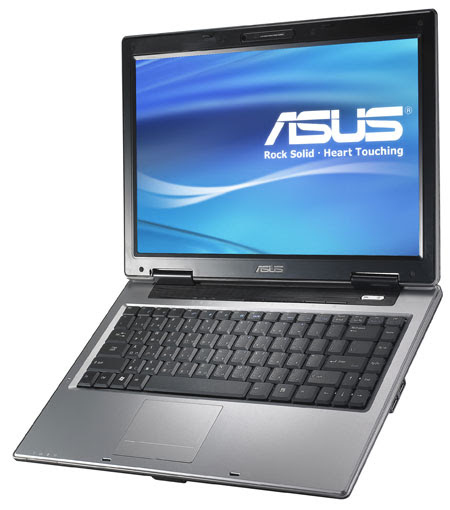 Many of us are geared up for Champions League action in the next 2 days.

I cannot vouch for fans of ManYoo, Cheat$ki or Liver-poor, but us Singapore Gooners are definitely staying up to watch this one. Problem is they are screening a delayed telecast.

This has been the bugbear of many Gooners. As someone rightly pointed out...

"b#@%$^ds. so they show a game with a forgone conclusion (Man Utd vs Lille) and a game between two has-been teams (Bayern vs Real), but not the mighty Arse. I'll never watch ESPN again!"

Well, it's not like we have any other legal options. Unless we are allowed satellites here in sunny Singapore, we'll have to put up with screwed up timing, one-sided analysis, biased reporting and TNP proudly featuring turncoats like Raja Edwin(TNP Feb28)

In fact, we see many of them at Liz Pub. They wear the club jersey, find a comfy sofa and just sit there watching their teams play. No shouts, no cheers, no jeers, no passion. Heck they might as well watch at S-11, the drinks are cheaper there!

Give those seats up for real supporters, like the Singapore Gooners. 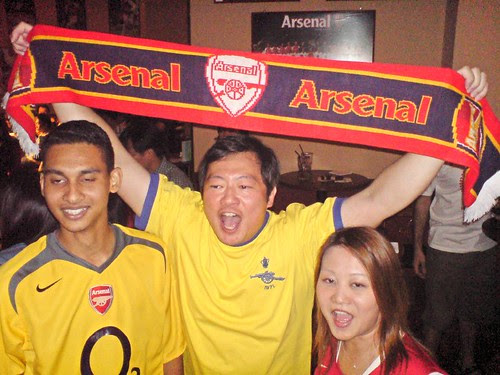 "Great!" I thought, "my dinner is settled for the weekend."

When I did arrive at the dinner organized by Mum's senior citizen club, I was slapping the back of my head. There was 1 disco ball on stage, a 3 piece band, and an average age of 65 amongst the dinner guests. 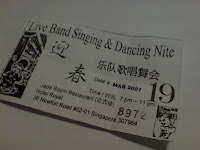 Yet, it was endearing to see so many seniors enjoying their golden years with friends. Some came as a family unit, with grandchildren in tow, as this was the last day of the CNY celebrations. I found my Mum and took the seat next to her. 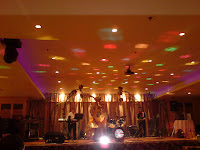 The dinner was nothing to shout about, served without much frills. What did drew me was the way these folks were so keen on having a good time. With some of the younger crowd they were cringing at the karaoke, the cha cha dancing and the over-the-top entertainer. I looked on and began to warm up to how the seniors were enjoying their Sunday night out, and appreciate their efforts in staying young at heart.

An uncle at the dinner asked about my age, and remarked that I looked younger than I really was. I told him that if I had my way, I'd be still want to be cha cha-ing when I get to be his age.

Come on let's boogie!!
No comments:

It was a good trip to London this time. It almost felt like a pilgrimage. I'd planned on watching the FA Cup 5th Round with Blackburn. And I had access to a ticket for the match too, care of a fellow Singapore Gooner. But my poor grasp of local geography made me think that EWood Park was just a tube ride away. I found out in the end that Blackburn was closer to Midlands/Manchester. 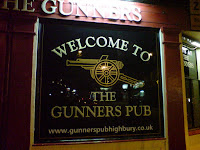 My tour of the area continued the next day with a visit to the All Arsenal store at the Emirates. I'd just missed the last tour of the day, so spent quite a bit of time going through the Arsenal merchandise in the store. I'd chanced upon a polo shirt that I liked, and saw that it had different buttons to the rest. Upon closer inspection, I realized that it said "Liverpool Football Club" instead!! I pointed this out to a staff in the shop and he went bonkers and made a few frantic calls to the warehouse. They were surprised that I spotted it in the first place. Keen eye for the Singaporean Gooner. 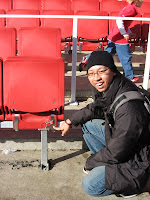 This Singapore Gooner then booked himself on an early morning stadium tour the next day. Being one of the newer stadiums to be build in recent times, it had all the best features. I had to stop several times to take in the huge stadium! Did you know that Arsene's seat at the pit is numbered 13??

After the tour, more shopping, this time at the Armoury. I had to check myself several times and put items back on the rack

before I overspent! Got hold of a nice T-shirt in the end.

Last lap around The Emirates, and then soaked up some history in the Museum. Spent another hour here, going through the interactive displays and memorabilia. Snapped more photos before heading back to the hotel.

Will definitely go back, perhaps with other Singapore Gooners to watch a match?! 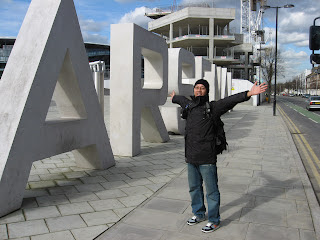