No Success without U!!

Sometimes when you hang around a group of people long enough, a certain level of bond is fostered. This is what happened over the weekend in Penang.

As you might have read from my previous post, this was a trip to measure our level of competitiveness and readiness for the events in the Singapore Dragon Boat Festival on 24/25 June. I am proud to say that we went into the races as newbies but never underestimating ourselves. We gave our best and held our heads high after each event. Who would've thought that an amateur outfit with little or no support from the Company would be able to sign themselves up in an international event.

Credit is due to the coaches, who's always been able to motivate us with much patience. Our Assistant Team Manager also did a fantastic job with all the logistics, sacrificing many of his waking hours to ensure that we have our needs taken care of. The support we got from our crews' family and friends were invaluable as well, many of them doing thankless mundane stuff such as looking after our belongings/taking photos/carrying equipment. Last but not least, all the rowers who came on this trip, your contribution to the team will not be forgotten anytime soon.

Although we did not come away with any medals, we gained a better understanding of each other through encouragement and sheer will. Spending the weekend together with some fun and games also got us to know each other a bit better and build even closer ties to the Club. I am sure that we will be more motivated to do well for the coming race.

Now that the dust has settled, it's time to move on to other things that are of concern to me.

I'm going with a the team to Penang for their Penang International Dragon Boat Festival. All expenses are borne by ourselves, just so we can taste some outside competition. I know that we will give our best, even if we most probably won't come back with any prizes. The experience itself should be worth the coach ticket. I never visited Penang before, but doubt will have time to sight see either. Most of the crew are coming back straight after the race, as they have morning flights the next day. So rush...roster planning very cheebye!

We're also getting closer to the June Singapore Dragon Boat Festival. Training will be intensified from this month on. I know that some of us are not rowing to our best potential, myself included, so we really have to pull up our socks from here on.

My coach is pining alot of hopes on us this season. The pressure to get at least a 3rd position for at least 1 team is very big. If we do, it'll bode well for our club. Membership may go up, we might get more help from the Company(esp the cheebye planners) , and hopefully get more funding for the team. If we don't, I can imagine all our best efforts losing it's momentum, worse my Coach may lose heart and forsake us.

So yes, it's time to put on our game faces and charge into June.
3 comments:

We were that close, all 70 mins of the game, with 10 men against Barcelona.

I can't write much now, too much to swallow, however we console each other.

If you like you can read SG Gooner or Gunner13.

I have to lie down. 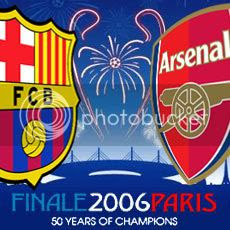 Counting down to the Champion League Finals. I never got so excited over a telecast of a football match before, not even during the World Cup. And no, I didn't put down any form of wager for the match, I don't believe in it.

I swapped my Taipei flight away just so I can be in Singapore with fellow SG Gooners to cheer Arsenal on. The match will be shown on Thurs 2am. I'm keeping myself busy the whole of Wed, right up till around 11pm. That way I won't be fidgeting about thinking of the biggest game EVER for Arsenal.

I'm also getting anyone I know who likes Arsenal to come to Elizabeth Pub/Modestos to lend their voice and spirit to the team. I understand there'll be some media at the pub. Good, that way we can get the Official Arsenal Supporters Singapore formed faster with the extra publicity.

Yes, the jerseys will be on parade, scarves will be waved about, boisterous men will be singing songs only fans will understand. Hey it's Arsenal's turn in the spotlight, and I dare you to find any Barca fans that are as loud as us!!
1 comment:

Yes..I'm gonna talk about football/soccer again. The month of June will see a sharp decrease in productivity at work, with the opposite at the clinics. It's a regular occurance every 4 years. Why?

The World Cup is back.

Now, I watch soccer for it's entertainment value. I don't particularly have a favourite team(country) that I support. I hear that Brazil are favourites, yet England seem to have a good chance, the host Germany aren't exactly pushovers, and you'd have to punt on the outsiders time to time--remember Republic of Korea and Greece?

It's almost sacrilegous not to mention the previous matches at the office. People will be looking at you strangely if you don't, as if eating, living and breathing soccer was the norm here. 4-4-2, 4-5-1, 4-3-3 and other strange permutations will roll off people's tongue. Fortunes will be made, mostly lost, on spur of the moments wagers based on "reliable" sources.

Just about the only players I'd recognise would be a handful from the EPL. After all, here we are fed on a good diet of it. It's no wonder many are fans of the England team.

I have reservations though. Even the NBA players, when they come together, don't do very well on the international arena. Just because the English invented soccer does not a World Cup Champion make. Remember how they choked at the last Euro?

Remember, the ball is round, anything can and will happen.
No comments:

So I heard there were 3 long weekends in May this year. People must've had a good time spending their Progress Package. I heard they had such a good time, that many didn't bother about the elections.

I'd wanted to cast my vote, would've been a first for me. Living in one of the most fiercely contested seat on the island, I'd wanted my vote counted. Alas, work kept me away and I came back to find that it was down to the wire on vote counting day.

I'm impressed with what the other party has done, grabbing a sizable percentage. I won't say I don't like the way many things are done now, but an alternative voice would be nice to hear instead of the usual drone that you get at every political broadcast.

Vacation time is here again, all 10days of it. I'd zealously took out my calendar and started plotting my errands, tasks, and social gatherings when I stopped.

For all best intentions, I've never been a good Virgo ie. a perfectionist. Sure I bitch about some of my colleagues' lack of pride in their work, and yes I have a system of doing my laundry(down to the order of washing them). Take a look around me, however, and you'd realise that I'm not destined for the big time.

I'm more prone to planning to fail, rather than the other way round.

I've recently become involved in the administrative running of my 2 extra curricular activities. Both somewhat involve motivating people to get off their butts and doing something that they have a keen interest in.

Not easy, when you consider that the general populace is sharply honed in apathy. I always wonder how the people who started it keeps going. Where do they find the zest, on top of ecking out a living in their daily life? Truly, leadership is a skill that will take me many moons to master.

Have a Spunky one!

You are temperamental, yet understanding

You are reckless, yet sensible

You are young, yet mature beyond your years

You are my Sis, and also a friend

To see the Captain of your favourite team score a hat-trick in the last match of the season, at the last venue for the Club.

To see your closest competitors fall wayside, and have yourself advance to the Champions League(again) next season.

To see all them goals at the best possible venue in Singapore, with fellow Gooners singing and shouting along with you.

And to know that come Champions League Final, Liz Pub would be open.

I know that I've been writing alot about Arsenal recently, but I make no apologies for it.

Here is a healthy activity that I can spend my time on without incurring too much expense or other people's wrath.

It's just a few games that we watch together at Elizabeth Pub, that's all.

A friend says I a bit bo liao to be involved in this at my age.

So I woke up late for my Mum's birthday lunch. Got dressed quickyly and walked over to her place. Dad was already getting dressed when he saw me, seem really happy too (to see me, that is) .

Halfway to the restaurant realised that no reservations were made! Great, on Labour Day holiday somemore. Decided not to queue up like an idiot, so started looking for another restaurant. Found this indonesian one, which had a ready table for us. Only after sitting down I realised that the food was average, service was minimal, and my Mum don't take spicy food. Bad Ahtiong.

Then again, no one else came up with a back-up plan either.