2 years ago I was all gungho about being involved in club activities. It was refreshing, challenging, and gave me a sense of belonging. The energy within the committee was electric. Though not smooth all the time, the clubs are managed well enough.

As with most of what I do though, I got bored. The meetings, the logistics, the paperwork. Oh the paperwork!! I have taken on more than I can chew. Productivity on my part came to a halt. It was not doing both clubs any good for me to stay on.

And so I stepped down. It is a win-win. I can continue to like what the clubs are doing for members, and still maintain a casual, civil relationship with the exco.

I shall stick to organizing random ctivities on the fly with the motley crew I hang with. More fun in that.

And look, no paperwork!!

After the last outing to Drama Centre, I was really hoping that the night out to Esplanade turns out much better.
And it did indeed.
I remember I was in a cab when some Mandarin radio station deejay was interviewing one of the cast members, Emma Yong, who did her Chinese best in that interview, haltingly. My ears perked up when I heard that Singapore's queen of drag, Kumar and my boyhood Asia Bagus host, Najip Ali, are part of the ensemble in this production! 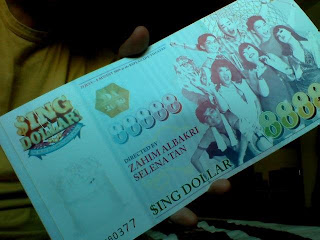 Helmed by Selena Tan of Dim Sum Dollies fame, $ingDollar promised much right from the 1st night it opened. One only has to have a feel of the programme for this musical to see that it is bank-rolled a well sponsored one, even if it doesn't make much ticket sales, which I highly doubt.
$ingDollar does well to engage the audience; with a familar setting (Geylang) , the standard stereotypes (most Bhangladeshis are muslims and CAN eat beef, as explained by Kumar's character as, what else, the foreign labourer) , and scores of ditties that poke fun at anything and everything local-centric. All this was played out with an actual live band behind, and the sets look great.
I especially enjoyed the Micheal Jackson 'tribute' which they worked in, with men who were until recently held in high regard but landed in deep shite taking their turns doing their MJ thang. Heck they even managed to work a disgraced monk into the number!
Brilliant.
The trio of Selena, Emma and Pam are good, dimsumdollying their way around. Kumar was the funny one, ad-libbing his way through at some parts. Najip Ali is the better dancer, Hossan Leong the better singer. Lim Kay Siu is the veteren, whilst Sebastian Tan... well let's just say I am not streching my neck out for his Broadway Beng production coming soon.
The musical is the a great sum of all the above talents, and worth wearing something smarter than bermudas and flip flops for.
4/5 stars!
P.S. What's with the local audience being so stingy with a standing ovation, har?!
2 comments: