Now, who here doesn't like gifts? We all do. Getting the right one, however, is almost an exact science. It has to trigger a sense of warmth, has to be useful, and suit the recipient's taste and character. Unlike some other places that I go, we don't exactly go back to the stores to return gifts that we don't like. So getting it right the 1st time is critical.

I used to organize most of the birthday parties when flying with my colleagues. I took it upon myself to get the cake, made sure all signed the card, and most times bought the present too. It's not easy, especially when it comes to buying the gifts. I'd only come across as thoughtless if I were to say, buy perfumes for the ladies, and another wallet for the guys.

I would like to think that I'm good with gifts. What I mean is I put some thought into the gift item. No photo frames, perfumes, or pens from me.

Women, in general, like gifts that invoke an emotion. For example; Branded items like handbags, wallets, jewelry etc. These don't exactly have many uses, yet cost quite a bit. Most are elated when they see the familiar logo or tag on said items. Yes, you'd notice that many are carrying the latest mp3 players around now, but how many of them actually know how to download and save those songs in there? Half the time the other half does the work of loading the tunes into the gizmo. What about digital cameras? Seriously, do you need a miniature-ish 5-6 megapixel one costing upwards of $500 when all you do is take a few snaps at a party, using ONLY the auto mode?

Men, on the other hand, like gifts that are an extension of themselves. It's common to have gals asking other guys what they can get for their men. For example; You don't just get any of the latest mobile phone thinking that'll please him. Does it have a 2megapixel camera with auto focus and auto flash, Bluetooth enabled, able to play mp3's, have a long battery life, have slots for expansion cards? Will the item cause an embarrassing bulge in his pocket? What about the cool factor, or would he become geekier than he already is? Will the phone be deemed as "old model" as soon as you buy it, cuz you didn't do enough research and notice that another BETTER one is coming out in a few weeks time, which costs less!

So as one can deduce, gift giving is really an art in itself. Whoever said that it's the thought that counts when he gets another belt for his birthday obviously has to buy his own favourite things all the time...

And what did I get this holiday season?? 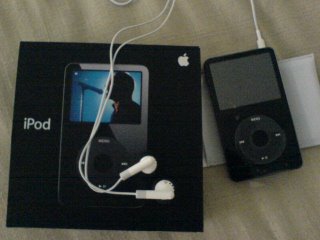 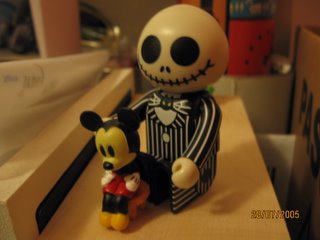 I've nothing to offer
"Gasp! Not even a rose?!"
What I came up with
Is for you this prose

Relationships don't all last
Till our dying days
But I'll always remember this one
Till I'm old and gray
5 comments:

The streets are jammed, the trains are packed, people are walking around with large shopping bags, and sales persons are the most industrious lot. Yes, X'mas is upon us again. If there's one Holiday that brings out the best and worst of us, it's Christmas.

We are a fortunate lot here on this sunny(with occasional showers) island. We 'celebrate' every donkey festival/holiday there is, even though we may not have any affiliation to it. I say 'celebrate' cuz it only means another few days off work for us. Save for a few people I know, not many celebrate their respective festivals with much fevour.

The trend now is to escape away during the long breaks that the holidays bring, pretty much throwing the meaning of celebration with friends and family outta the window, really. And you really wonder whether they checked their festive spirit away into the cargo hold when they board. Some of us work through the holidays and really don't catch a break when some, in their bid to enjoy more value for their flight, become a mini monster and ask for everything except the pilot seat in the plane.

I will be around this X'mas. Is it a blessing or not I dunno. I hope to spend some quality time with friends; away from the hustle and bustle of town, without paying exhorbitant prices for that same jug of beer, and having to rub against sweaty strangers in a club that I paid a ga-zillion bucks to get in after queuing for up to an hour, sometimes in the rain. Ahh, to be young again... ...

Just about the only gift I got was for my Sis. She's an Apple fan, and I must admit that I'm quite taken by their line of products. A look at the price tag promptly reminds me that I will only be window shopping at their ipods, iBook, iMac and i-everything else for some time to come. I haven't got down to buying anything else yet and it seems I'll have to make very select choices when the time comes to open up my wallet and swipe that credit card.
4 comments:

Tomorrow my very good friend recocoon will be holding his wedding dinner. Considering how busy he and his wife's schedules are, it's very commendable that they can pull it off without much cock-ups. Sure, there'll be those who didn't RSVP and decided to show up at the last-est minute, and also those that promised to come but don't. 2 flower girls became 6 cuz the kids were fighting over who should do the honors for "Yi-yi".

I have been tasked to be the MC for the night, ala Channel 8. I have to go thru the night speaking Mandarin, which is not easy even though I came from a school thick with Chinese cultural background.

First I tried to draft it by hand, then found that my Chinese handwriting is not very legible, plus I keep forgetting how to write certain words... Many of them in fact. Then I remembered downloading some Chinese word processor program online and used that. Took me an hour to finish writing one paragraph cuz I didn't wanna go thru the tutorial. When I finally got going I had difficulty translating what I had in my mind(English) onto hard copy(Mandarin) . I listened to a decent number of Mandarin lovey-dovey songs, cheated a bit and began looking up Chinese websites for inspiration(read:cut and paste) and threw in some song lyrics I remember from my karaoke days...

After an initial draft and fine tuning by going thru the series of events for the night with the couple, I got it down to a decent 1 page which I'll try to memorize and not peep at during the night. This feels like the Mandarin storytelling competition I went through in Primary school all over again...

Most people would bail when they are assigned the duty of the MC for the wedding dinner. For all their upfront bravado over beers and nuts, not many are thick-skinned enough to stand up on stage and be subject to the scrutiny of the many guests that will be tsk-ing every word you utter wrongly. That or they'll be too busy burying their faces with food and only look up when the lights are dimmed down, and that only is because they can't see where the rest of the sharksfin is...

I, though, took it in my stride as red is one of my very good friend from more than a decade back. Then there's this tiny narcissistic side to me that wishes to get into a nice Prada suit and swoon people over with my monologue. I'm tingling all over, in a good way, and promise to give him a very good intro when he steps thru the door tomorrow night. 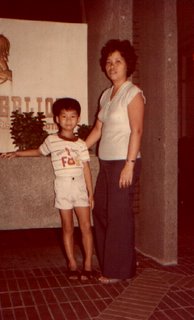 My place has been inundated with many visits from Mummy Dearest recently. As some of you would know, my Bro has moved out to his own new pad and I have ben left to my own devices in this humble 'ol 3-room flat of mine.

It has been given a new lease of life under the hard working and often wrinkled hands of Mummy. The rooms are spotless, most of my clothes are handwashed, and I can actually eat off the kitchen floor even! How true it is when they say that 家有一老如有一宝. Although I'd stop short of having her here on a permanent basis, it's nice to come home after a week of flights and see that I have a clean place to wind down.My stoic stance on independance has been pleasantly rattled by her visits.

I hear that in some parts of Italy, grown men still send their Armani shirts and Prada pants back home from the cities so that it can be lovingly handwashed by their Mums. Movies depicting Italian mobsters hanging to Mama's every word are not too far fetched either, I think.

Now I get regular calls from Mummy Dearest for the minutest details around the home; a carton of eggs, bring in the laundered clothes, come home for home cooked food... Honestly, I'm getting spoilt by the greatest woman alive, in my books.